OMEATH - A LOOK AT THE PAST 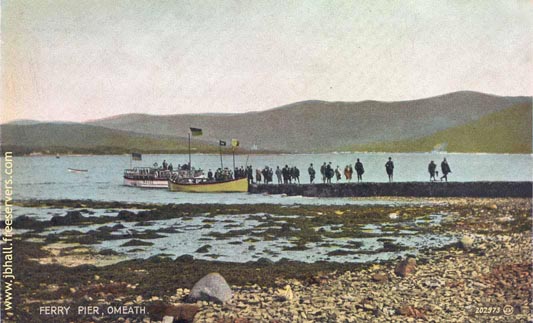 History, Legends, Stories, Genealogies of the Ten Townlands of Omeath:

Omeath Townland and Their Meanings

Education in Omeath by Desmond O'Neill

An Irish Calvary in the Shadow of Slieve Foy

Memories of Blackpool by Eva Molloy

Together in Exile by Peter Murphy

The New Church by Turlough McKevitt

Trades of the Past in Omeath by Róisín Mulligan

Rowing Back the Years

Air Accident in the Cooley Mountains by Mary Mulligan

Project Shops and Other Commercial Premises by Frances Mulligan

The Townland of Ballynoonan by B. Morgan

Walks with Eva by Eva Molloy

My Memories of Paddy O'Hanlon

A Great Sadness at Lislea by Michael Burke

The Dundalk, Newry and Greenore Railway by Anne McKeown

Prayer of Fishermen of Omeath

Lead-up to School in Dublin House by Frank Rooney

The Major Family of Knocknagoran

The Turf Bog by Frank Rooney

My Search for my Irish Grandmother by Eileen McGeown

(Back to Further Reading page)